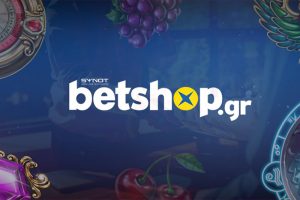 The supplier announced Monday that as part of this new deal, its titles have gone live with the online casino and betting operator and are now available to its many Greek players.

The agreement with Betshop has further increased SYNOT’s Greek audience and has further cemented the provider’s footing in that important market. And thanks to the deal, Betshop’s local players can now play latest SYNOT hits Respin Joker and Diamondz as well as other titles from the company’s ever-growing portfolio.

Betshop was launched in 2014 to bring innovation to the Greek online casino industry. Since then, the operation has consistently improved the betting and gaming experience it offers to its customers to successfully continue to serve its core values.

That agreement saw SYNOT launch its products with the operator’s VoodooDreams, NYspins, and Duelz online casino brands. All three operations boast significant presence in key European markets, including the Nordics, Germany, and the UK. Teaming up with SuprNation and its operations has provided the content supplier with the opportunity to further strengthen its presence in important jurisdictions as it looks to establish itself as a leader in the provision of products for the iGaming industry.

Ecstatic to Further Expand in Greece

Commenting on their partnership with Betshop, SYNOT Games Senior Account Manager Birdzhan Hyuseinova said that over the past several months the company has rapidly grown its presence across multiple jurisdictions and regulated markets and that they are ecstatic to now be further expanding in Greece and offering their content to more players there.

Ms. Hyuseinova further pointed out that this milestone deal with Betshop is in line with their strategy to continue to enhance their foothold in this particular market.

Massimiliano Cerfoglia, CPO B2B at Gaming Services Ltd. (Betshop.GR’s parent organization) said that the addition of SYNOT Games products will “prove to be a tremendous asset” to their portfolio of offering and that they believe the supplier’s games will quickly find their place among the favorite ones enjoyed by their players.

SYNOT Games is licensed and regulated by the Malta Gaming Authority and the UK Gambling Commission, and its content is certified by regulators in a number of European markets, including Spain, Italy, Portugal, Sweden, Denmark, Latvia, Lithuania, Greece, the Czech Republic, Romania, Slovakia, and more.

Its portfolio includes more than 70 games that are available in 28 languages and are live with more than 150 online casinos.