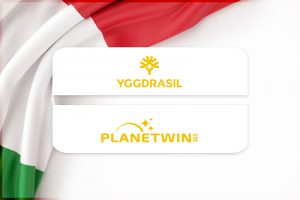 As part of the agreement, Yggdrasil has successfully integrated an initial 24 gaming titles from its ever-growing suite and these can now be played by Planetwin365 players in Italy.

Founded in 2013, Yggdrasil has grown to become one of the leading providers of iGaming content. In early 2020, the company introduced three value propositions – YG Franchise, YG Masters, and YG Game IP – aimed at helping young studios establish themselves in the highly competitive online gaming industry.

Yggdrasil is headquartered in Sweden and also has offices in Malta (where its operational headquarters is based), Poland, and Gibraltar.

The company first entered Italy in 2017 and has since then sealed several strategic partnerships to cement its presence in one of Europe’s largest regulated markets.

Testament to Yggdrasil’s Popularity in Italy

Commenting on their latest important deal, Yggdrasil Chief of Global Market Operations Björn Krantz said that teaming up with another leading locally licensed operator is “a testament to the popularity of our content in Italy” where they already have a strong presence.

Mr. Krantz went on that together with Planetwin365 they will be able to reach an even wider audience of players and provide them with “the excitement and entertainment that our games offer.”

SKS365 Chief Commercial Officer Troy Cox added that they are delighted to add Yggdrasil’s titles to their existing offering and make these available to their Italian customers.

The official went on to say that their new partner provides content of the highest quality and that its products enjoy growing popularity with the local gambling audience.

According to Mr. Cox, the recent rollout of Yggdrasil content on their flagship gaming site is a great addition to their existing portfolio and will enable them to provide their players with “a more complete, richer, more immersive and entertaining gaming experience.”

As mentioned above, SKS365 is not the only Italy-facing gambling company that Yggdrasil works with. Last year, the supplier announced a content supply deal with Microgame, a leading iGaming platform provider servicing the local market. Under that agreement, Microgame’s more than 37 operator partners were initially provided with access to more than 80 of Yggdrasil’s gaming titles.